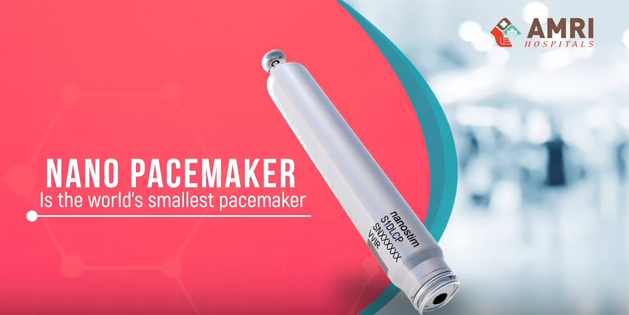 A breakthrough technology to enhancing the treatment for heart patients at AMRI Hospitals, Nano pacemaker is the world’s smallest pacemaker. An implantable device, it sends electrical pulses to the heart whenever the patient’s heartbeat is too slow.  The device uses electrical stimulation therapy to regulate heartbeat and manage the complications with ease.

Based on the results of a series of trials at AMRI Hospitals, best cardiology hospital in Kolkata, the Nano Pacemaker has proved to be a highly effective device, offering a number of benefits over the traditional pacing systems. It is less invasive and completely self-contained within the heart. The device also has significantly less complications like systemic infection, along with the number of days the patient needs to spend in the hospital.

Apart from being wireless and leadless, the Nano Pacemaker is the size of a regular medicated capsule consumed by people (less than ten per cent the size of a traditional pacemaker). Approved by FDA in 2016, the Nano Pacemaker has proved effective in reducing the device-related infections. As a safe alternative for cardiac pacing, it is sure to have a more profound impact in the upcoming years.