KOLKATA: In a ground-breaking surgery, a team of surgeons in a Kolkata hospital successfully removed a tumour on the liver from a 61-year-old man, which weighed around 2 Kilos and was around 15 cm by 15 cm in size.

Dilip Kumar Halder, a resident of Nadia , is currently doing well and was discharged from on AMRI Hospitals , Dhakuria on Wednesday.

The massive malignant tumour had covered almost the whole left section of the patient’s liver, even the two crucial blood vessels in the organ, which control the inflow and outflow of blood to the liver. Senior Consultant GI & Oncosurgeon, Dr Suddhasattwa Sen pointed out that the surgery was crucial and difficult due to the size of the tumour and its position.

“Liver tumours are usually 2 to 5 cm in size, and only in rarest of cases a tumour covers that much area of the organ. In the case Halder, it was even more difficult because if either of the blood vessels had got damaged during surgery, it could have been fatal for the patient. As itself, in liver surgeries there is a lot of blood loss but we managed to conduct a bloodless surgery,” Dr Sen said.

The form of liver cancer the patient was suffering from is known as Intrahepatic Cholangiocarcinoma , and is one of the most vicious forms of cancer, where surgery is often the only solution, the surgeon added. Halder said that he hardly had any symptoms for the first few months until around four months back when his stomach protruded out as the tumour grew.

“I felt unwell all the time and I hardly had any appetite except for a general unease every time I ate something. Despite my stomach swelling outwards, I did not feel much pain. I consulted a local doctor, who suggested that I get it checked at Kolkata. Now I am feeling fine and I am able to eat a normal home-like diet,” Halder said.

Doctors pointed out that despite the size of the tumour and its spread across the left lobe of the liver, the patient recovered well and was discharged only after four days of the surgery, without any complications. 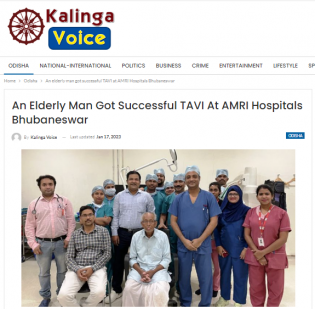 Bhubaneswar: An 83-years-old man was admitted with... 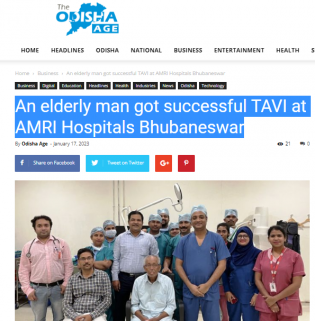 An 83-years-old man was admitted with recurrent fa... 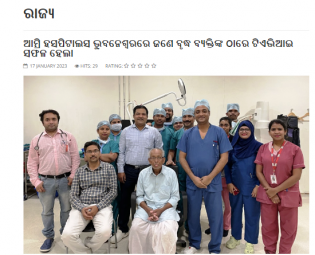 Successful TAVI in an eld...